Snow Leopard Safari Or Expedition? What's In A Name?

Snow leopard safari? As snow leopard experts, here’s why we don’t use the ‘s’ word when describing these trips. Quest? Yes. Expedition? Yup. Tour? Sure.

Our team loves safaris. And we love snow leopards. Yet, we never call our journeys in search of the grey ghost a ‘snow leopard safari.’

This decision is based on important differences in style of travel. It is also based on setting the right type of expectation for our guests. We don’t want guests traveling to the Western Himalayas expecting a snow leopard safari. We want them ready for an expedition.

What Is A Snow Leopard Safari?

Today, when someone thinks safari, they think of the vast wildernesses of Africa. Perhaps a safari to Kenya’s Masai Mara in search of lions, or a visit to Londolozi in search of leopards. Maybe one of Voygr’s tiger safaris to Ranthambhore.

But what’s the difference? Aren’t these trips all wildlife focused? If one is searching for snow leopards, isn’t ‘snow leopard safari’ an accurate description of the type of trip?

No. To us, a safari is a very specific type of trip. It is very different from a tour, an expedition, or a quest.

Give your favorite travel agent a call. Ask them to recommend a great safari – you’ll get a dozen recommendations for Africa.

A snow leopard on a high ridge. Image from a camera trap placed on a ridge 2 hours walk above our remote camp.

The word safari itself is the Swahili word for journey. It comes from the Arabic safar, to travel. Historically, this African word was used to describe big-game hunts in Africa. Today, it’s mostly used to describe wildlife focused leisure travel – mostly in Africa.

But it isn’t the location of a safari that defines it. It’s the style of travel. The word has come to evoke a certain type of accommodation in combination with long game drives in areas with abundant wildlife. It is associated with warmth and comfort.

The word safari is even associated with fashion. Chic khaki clothing and Hemingway style safari jackets convey adventure and style.

A safari is an easy form of travel. Relatively speaking, of course. One still has to get to remote bush camps, get up before dawn, and bump around a Land Cruiser in the wild. But it is for the most part a very comfortable way to explore nature.

And this is our problem with this word. This abundance is why we can never use the term “snow leopard safari.”

The Issue of Comfort : Snow Leopard Safari vs Expedition

One of the reasons we choose to use the word expedition is to draw a clear distinction between the comforts of a safari and the possible rigors of an expedition.

We have a great article that breaks down the differences between snow leopard tracking tours in Mongolia, India, and Kyrgyzstan. It covers a lot of different points. We discuss everything from toilets, to altitudes, to the climate, to actual chances of seeing a snow leopard. We also provide a scale in this article. It rates comfort on a scale of 1 to 5. 1/5 is a beach vacation in the Caribbean. 5/5 is a winter camping trip in Siberia.

A snow leopard blends into the landscape in Ladakh. Can you see it?

Even though Ladakh and Mongolia are both rated 3/5 for comfort, Ladakh is high altitude and Mongolia is not. Ladakh is actually more comfortable in some ways and has a better chance of snow leopard sightings. But the altitude makes it a tougher trip for some, so we use the word expedition to give it a more real feel. On the other hand, Kyrgyzstan is a much more difficult trip. It’s remote and uses horses as the primary transport when in the reserve. The camp is also much more basic, unlike our lux camp in Ladakh, and ‘very nice’ camp in Mongolia. It is definitely an expedition.

Mongolia, because of its lower altitude is shunted into the “tour” category. It is a trip that is doable by most people. Sure, there’s some remote camping. But you’re in large yurts, on decent beds. There isn’t any real hiking, and you use Land Cruisers everywhere.

In Ladakh, too, we mostly drive around. Our trackers can reach most of their top spotting locations by vehicle. So there are many similarities to a safari, but we aren’t going to be calling it a snow leopard safari any time soon. And that is because of the level of luxury that is possible here. Or more specifically, what is not possible.

A remote camp has its limitations. Especially one that operates in the Himalayas in winter. Ladakh is cut off by road from the rest of India for four months a year. Many things are in short supply during our peak season. However, all said and done, our snow leopard expedition to Ladakh is perhaps the most comfortable snow leopard tour available anywhere in the world.

But we’re still not going to call it a snow leopard safari.

Don’t get us wrong, we want to provide safari levels of comfort in our remote mountain camps. And we do get pretty close. But it cannot be as nice as an African safari.

Our tents are heated. But we cannot have a pool. The heating costs at this altitude and in our temperatures would be astronomical. And do guests really want to go swimming on a snow leopard tour? Our showers and toilets are heated. But they are not ensuite. We have many of them, there’s no wait line for a toilet or shower. But they are shared. We cannot create permanent infrastructure in the national park, or lay plumbing. So it must be centralized. These are the trade-offs for pitching camp in the heart of snow leopard habitat in the Himalayas.

What about the other comforts and luxuries that might turn it into a snow leopard safari? We already have a lot of those. We’ve got great multi-course meals, a well-stocked bar, incredibly knowledgable team members, and top optics from Swarovski.

Like the very best safari camps in Africa, our remote camps are a well-oiled machine. Sun-downers? We have those. Except guests aren’t outside looking at the sunset. They are inside our heated lounge, enjoying a hot toddy. Bed-side wake-up call? Sure. A french-press or a pot of tea delivered to your bed-side at a time of your choosing.

Is a Snow Leopard Safari Even Possible?

Well it comes back to what we discussed in the first part of the article. Abundance of wildlife.

Given that abundance is such a big part of a safari, we feel that calling our trips a snow leopard safari is promising a little too much. We don’t want you thinking you’ll see dozens of them while driving about the Himalayas.

And there is hope. We do know where and how to find snow leopards.

No Snow Leopard Safaris on Mountaintops

Our snow leopard expedition to Ladakh was the cover story for Condé Nast Traveller in October 2020. The author of the article, Maggie Shipstead, had a phenomenal trip. She had the holy grail of snow leopard sightings – a mother and two cubs for 5 hours. The last two sentences of her article sum up this essential problem we are writing about here.

Mountaintops. That’s where snow leopards walk. And this is not just a literary device. Over 70% of the time, our trackers find snow leopards when they are walking on a high ridge. Snow leopards do this to scan both sides of the mountain for prey.

We can definitely drive you. But not like in Africa. There are no snow leopard safaris on mountaintops.

We cannot take you to mountaintops on a snow leopard safari. There is no ‘pride’ of snow leopards we can drive to. In fact, snow leopards are so solitary that there isn’t even a term for a group of them. We can’t follow a snow leopard in a Land Cruiser as it stalks a herd of blue sheep, or hang out by a water-hole waiting for it to come by.

The vast majority of scientists that study snow leopards can count on one hand how many wild snow leopards they’ve seen in careers that span multiple decades. Our trackers find 30+ during peak season.

We average three snow leopards a week in Feb and March.

Three snow leopards a week! This is a phenomenal number.

Only the very best spotters and trackers on the planet can find them. Thankfully, they work for us. While we have a 100% success rate for our snow leopard expedition to Ladakh, we know we just need a week of bad luck to end that streak.

Compare this to the Masai Mara National Reserve in Kenya. It has an area of 580 square miles. And as of 2016, it had a population of 420 lions. That’s 1.3 lions per square mile. Of course, that’s not a very accurate way to describe it since they live in prides. So you’re likely to see a handful, or not see any at all. But with a great tracker, 4 wheels, and drivable terrain, the odds are in your favor.

So there it is. These aren’t snow leopard safaris. They are expeditions.

If you want to see a snow leopard, join one of our expeditions.

Bring your warm clothes, great spirits, and a thirst for adventure. 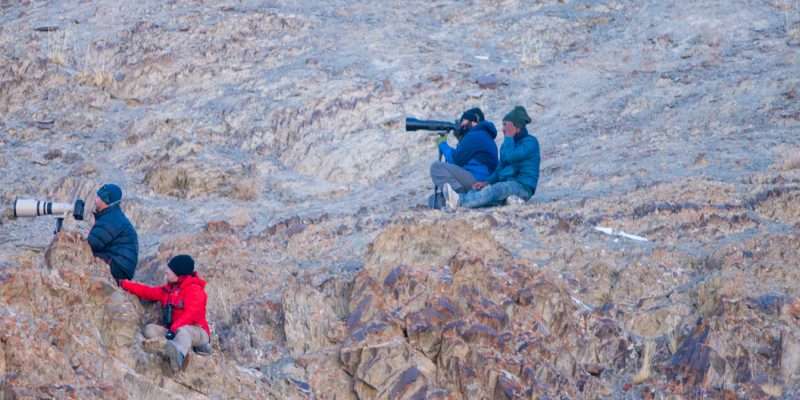 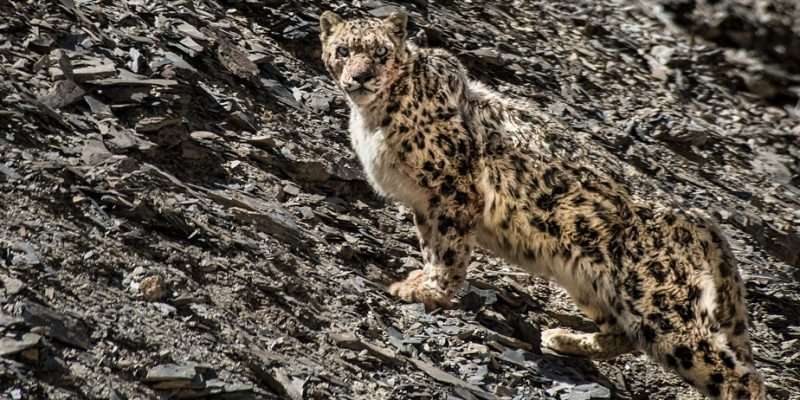 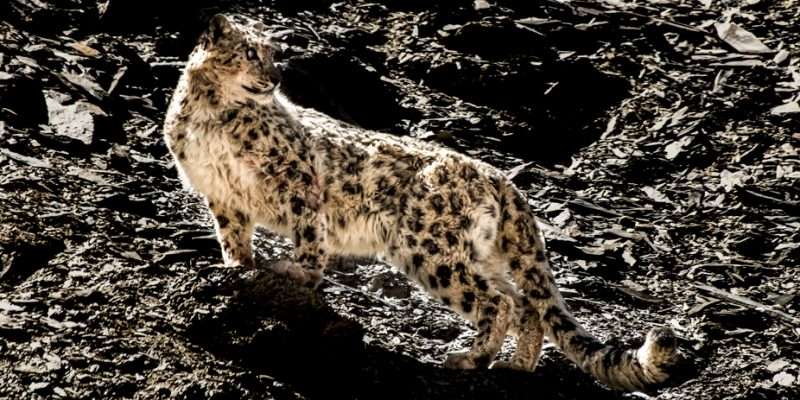 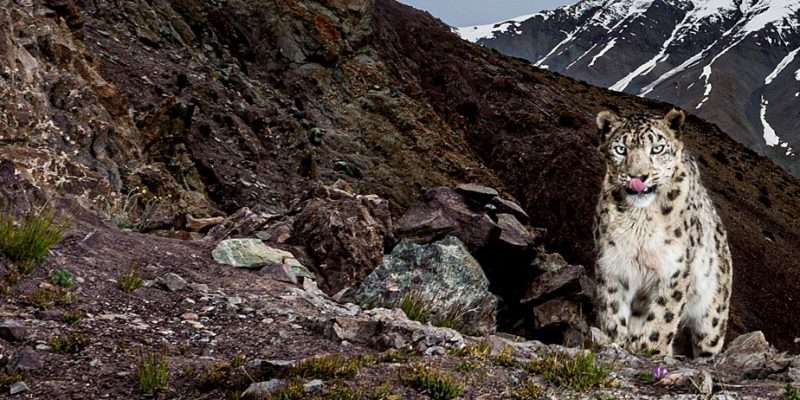 Want to plan the best snow leopard photo tour? We explain why some destinations are better than others and give you info on the ideal camera set-up.